From The Digital Bits:

Just hours after we posted our story in The Rumor Mill, the official Star Wars website has now officially confirmed it: Lucasfilm and 20th Century Fox are going to be releasing the original, undoctored and digitally-untweaked, theatrical versions of the Star Wars films on standard DVD in September. The films will be available on disc only for a very limited time, starting on September 12th (they’ll go out of print on December 31st). The films will be available as individual 2-disc sets (there may also be a box as well). One of the discs in each set will include the recent “2004” special edition version of the film, while the other disc will include the original theatrical version in anamorphic widescreen video, with audio in Dolby Digital 2.0 surround. And yes, on the 2-disc set of A New Hope… Han will shoot first! Here’s an official quote from Lucasfilm’s Senior Vice President, Jim Ward:

“Over the years, a truly countless number of fans have told us that they would love to see and own the original version that they remember experiencing in theaters. We returned to the Lucasfilm Archives to search exhaustively for source material that could be presented on DVD. This is something that we’re very excited to be able to give to fans in response to their continuing enthusiasm for Star Wars.”

Well, all I can say is… it’s about ___-damned TIME! So much for “those versions don’t exist anymore.” This is very good news indeed, and we’re very happy to see it finally happen. Hats off to George Lucas, Jim Ward and everyone who decided to finally make this a reality on DVD.

And before you ask, it IS DVD only… there’s no high-definition version expected this year. Just FYI.

So it’s going to have the original versions AND the special editions (which is good because I do like some of the changes). I guess I will have to sell my current DVD’s before then.

Are all cats this strange? 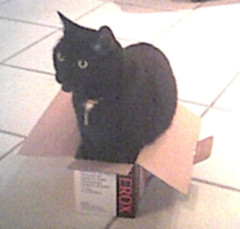 The Oscar nominees have been announced…

Another year where I haven’t seen any of the nominated movies.
END_OF_DOCUMENT_TOKEN_TO_BE_REPLACED

Read the rest of this page »

Which is more intelligent… a 4 year old human, or a cat?

The following stories appeared in the news on the same day and it got me wondering if maybe cats are as intelligent as a human child.